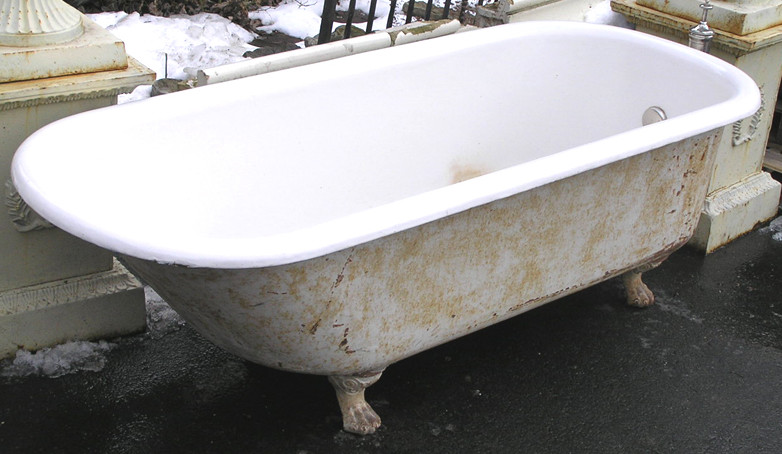 History of the Bathtub

Nothing is more relaxing than soaking in a hot bath.  Throw in some essential oils and a few aromatherapy candles and you have an inexpensive at home retreat.  With the current home spa trend reaching a fever pitch,  the bathtub certainly as come a long way from the tin vessel that had to be hauled in and filled with buckets of water heated over a fire.

Early bathing plumbing systems have been dated to 3300 BC,  when copper water pipes were discovered beneath a palace in Ancient India.  It was during the Roman Empire that daily bathing became the custom and both public and private baths were commonplace. Before indoor plumbing became the norm, portable bathtubs, were used.  These large, relatively light containers made of tin or copper were usually positioned by the fireplace and filled with hot water.  Legend has it that the phrase “Don’t throw the baby out with the bathwater” originates from the idea that an entire house hold would share the same bath water starting with the head of the house and ending with the baby.  Since the water would be so dark with dirt that the baby could be accidentally tossed out. The wealthier the home, the larger and more elaborate these vessels became By the mid-19th-century, some larger homes became equipped with water heating devices allowing the bath tub to be permanently built in usually surrounded with a wooden box.

The iconic clawfoot tub, originated in 18th century Holland.  With it’s signature ball and claw design, this cast iron tub became the height of fashion bathing in the 19th century. Most early bathtubs were fabricated from cast iron with a porcelain glaze fire on top of the metal.  Cast iron had many drawbacks as it is very heavy, remained cold even after hot water was added, and rusted easily if any of the glaze chipped away.  In the early 1900s, manufactures began producing the solid porcelain tub in both freestanding and built in forms.

White porcelain was the norm as it appeared disinfected and hygienic.   That changed around the 1930’s when color pigments were applied to the unglazed vitreous finish.   Pink, blue, and green bathrooms were wildly popular through end of World War II. Today, bathtubs come in a myriad of shapes, sizes, materials and functions.

Freestanding tubs have enjoyed a resurgence over the last few years, with designs to fit all design styles.

Mr. H says:  You can never have too many bubbles in the bath-Enjoy!

One thought on “History of the Bathtub”

Six ways to kill the germs and it includes vodka!

Five projects to tackle when you are stuck at home